Guadalupe López-Íñiguez plays on a cello by Claude Pieray (Paris, 1725) equipped with gut strings and an instrumental set-up inspired by examples from the early 19th century, and a bow by François Tourte (Paris, 1800). Olga Andryushchenko plays on a piano by Érard (Paris, 1862), serial number 32602. Musicological research behind the performances in this CD was funded by Kone Foundation (2016-2018). The CD is generously funded by the CulturArts funds in Valencia (Spain).

BBC Music Magazine – Classical music magazine UK (April 2019), CD review: “Mendelssohn’s cello works call for spirited playing, which is what we get here. The Érard piano sparkles; Melómano – Classical music magazine, Spain (1.5.2019), Mendelssohn CD review by Abelardo Martín Ruiz gives 5 stars ★★★★★ & monthly recommendation: “The cellist offers a contrasting proposal through an understanding of this music from a deep sensitivity and romantic expressiveness, with the brilliance and luminosity of the author’s language – a characteristic combination delimited by a resonance achieved through a complete understanding of gut strings’ acoustic production. Particularly moving are the interpretations of the slow movements… The rapid movements possess the energy of Mendelssohn’s exuberance… an idiomatic, prodigious knowledge of both instruments… an expressiveness of intense emotional component.”

Pizzicato – Music journal, Luxembourg (14.3.2019), Mendelssohn CD review by Uwe Krusch gives 5 stars ★★★★★: “Guadalupe Lopez Iniguez and Olga Andryushchenko play Mendelssohn’s cello chamber works on period instruments and orientate themselves towards historical sources. But since they are spicing their performances with own ideas, the result is rhetoric and therefore really gripping.”

Fanfare – Classical music magazine, USA (1.11.2019), Mendelssohn CD review by Scott Noriega: “How does this duo sound when they perform music? That is the important question. As two friends having the most fun that anyone could while playing music together! From the energetic opening of the D-Major Second Sonata, through its quirky Scherzo, its Bachian slow movement, and its joyous finale, there is never a moment that the two do not give the most of themselves. The Variations Concertantes are also filled with a true sense of discovery and risk taking – just witness the breakneck speed taken in the middle variations! But my favourite work in the recital must be the B-Major Sonata, a work which Schumann called ‘The purest music… as beautiful, clear and peculiar as ever emerged from the hands of a great artist.’ Perhaps it is the work’s peculiarities which most impress on this recital: the strange ominous opening with its winding figurations, the odd back and forth between the cello and the piano in the Andante, and the jubilant Finale with its quite closing measures, music which seems to dafe into the silence which surrounds it. It is in these moments when the two artists’ conceptions are most realized.”

Early Music Review – International review website (11.5.2019), Mendelssohn CD review by Dr. James Ross: “ [http://earlymusicreview.com/mendelssohn-works-for-piano-cello-on-period-instruments/]From her programme note, it is clear that Spanish cellist Guadalupe López Íñiguez loves Mendelssohn’s music, and perhaps even the man himself, and in that she is in complete agreement with my own tastes. Her 1725 Claude Pieray cello has been set up in the manner of early 19th-century instruments and fairly sings Mendelssohn’s lovely lyrical lines, while Olga Andryushchenko’s virtuosic and passionate playing on her 1862 Erard piano is also wonderfully expressive. […] The energy and technical assurance of all of this music is a testimony to the genius of its remarkable composer.”

Musicalifeiten – Classical music website, The Netherlands (1.5.2019), Mendelssohn CD review by Jan De Kruijff: “Perhaps this new recording [has] a bit more of the [original] spirit [than previous recordings by other artists]. As a first step towards “authenticity”, the duo provides very spiritual interpretations in which the piano sparkles and the cello can be heard warm and full of brilliance. Just listen to what the two make of the second part of the Sonata no. 1, which is at the same time scherzo and slow—well characterised—or how nice are the Variations Concertantes by presenting a mixture of panache and subtlety. The “corner” parts of Sonata no. 2 also sound very spontaneous.” 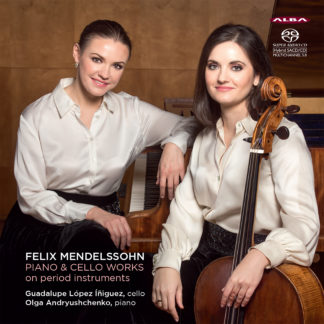