One of the leading Nordic quartets, the Swedish Stenhammar Quartet, takes on the works of Claude Debussy, Germaine Tailleferre and Maurice Ravel. The quartet’s previous recordings have been a success in international journals, and the new album will not be overshadowed by its predecessors. “The Stenhammar Quartet plays with dedication, with clear communicative and interpretive precision across the board” – MusicWeb International.

Germaine Tailleferre (1892-1983) is known as one of the members of the French composer group Les Six. She composed only one string quartet, between 1917 and 1919, when Les Six composers were gaining fame. Tailleferre’s string quartet is a sonatinous three-piece ensemble with a simplistic grit and restrained lust for Ravel’s neoclassicism and Les Six composers. The first and second parts proceed as vigilant dreamlike states and finally return to the top peacefully. The last part, on the other hand, tells a rich story with sudden situations, dry humor and ambiguous feelings.

Claude Debussy (1862-1918) and Maurice Ravel (1875-1937) both made one trip in the world of string quartets, resulting in a vastly known pair of pieces in the string quartet literature. As Ravel’s quartet (1902) was modeled on the one by Debussy (1893), they mirror what is called impressionist music. Closest to each other the string quartets come in the mischievous pizzicato-scherzo, the groovy punctuality of the earthy tempo underlined. What is also common is the slow recesses of the slow sections and the finals, which, instead of the usual celebratory decision, collectively bring together the thematic harvest of the work and leave a bleak absolute.

The Stenhammar Quartet has been active since 2002. Wilhelm Stenhammar’s works are naturally at the heart of the band’s work, but its program ranges from Baroque to contemporary music. The quartet regularly orders new works from Nordic composers such as Sven-David Sandström and Bent Sørensen, and has also premiered a number of dedicated works by American and British composers. The Stenhammar Quartet has recorded extensively for the Swedish Broadcasting Company as well as for various record labels, and its recordings have garnered Swedish Grammis nominations. In 2009, the Royal Swedish Academy of Music awarded the Quartet for its work on Swedish music. 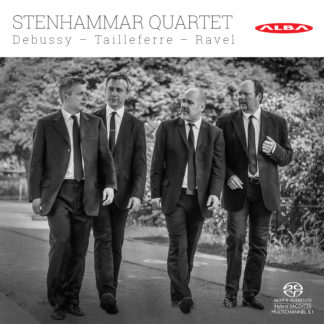