Here is something decidedly different—a mezzo-soprano in a recital of works for voice and violin where she not only sings, but plays the violin. Virpi Raisanen has a rich, warm mezzo-soprano, steady and even from top to bottom. She’d be a pleasure to hear in anything. She is also a first-rate violinist and combines her two skills in a beautiful recital, programmed with unusual works and a few more familiar pieces. The notes tell us that the recording was inspired by Gustav Holst’s Four Songs for Voice and Violin, Op. 35, a piece originally intended to be performed by one person, a violinist-singer. All of the music here was recorded with Ms Raisanen at the Renswoude Church in the Netherlands. She explains that Ilmari Maenpaa’s ‘Trasparente’ was composed as a collaboration between her and the composer. With film director Tapani Launonen the song was turned into a music video in 2010. It is a shimmering, haunting work that I listened to three times in a row. Raisanen also sings Jean van Vugt’s setting of Three William Blake Songs, Beverley Lunt’s ‘Sophia-Hokma’, and several arrangements of folk songs including ‘I Wonder as I Wander’ by John Jacob Niles. Notes on all the works are included in the slim booklet as well as texts and translations. The sound captures the unique glow of Raisanen’s voice and violin well. This is a very intimate, revealing recital, one that I shall return to often when needing reassurance in these turbulent times. 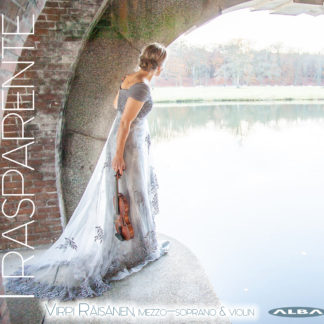