The Chamber Music of Juha Leinonen

LEINONEN: Athene, Sextet for Clarinet, Piano & String Quartet. String Quartet No. 1, “Diary Sketches.” Foga, Quintet for Clarinet/Bass Clarinet, Violin, Viola, Cello & Piano / Olli Leppänemi, cl/bs-cl; Terhi Paldanius, Jukka Untamala, vln; Antti Tikkanen vla; Tomas Nuñez-Garcés, cel; Roope Gröndahl, pno / Alba ABCD 447
Juha Leinonen (b. 1956) is a Finnish composer who studied with Jouni Kaipainen and Esko Syvinski. The liner notes tell us that “He has composed works in most of the Western Classical genres: for solo instruments, chamber music, con­certos, chamber and orchestral works and vocal music (solo songs and repertoire for all types of choir); his early output also includes works for the stage. His style ranges from complex, motoric and rhythmically throbbing to serene lyricism, and selectively incorpo­rates influences from as far back as the Baroque. Recently, folkloristic and National-Romantic impulses have appeared in his vocal music.”

Leinonen’s music clearly fits into the edgy-atonal style so much in vogue nowadays. The difference is that it has a distinct pulse that engenders forward motion and also has interesting development. The clarinet-piano-strings sextet Athene opens with a crashing crushed chord before moving into a sort of moto perpetuo of rapid eighths played by the keyboard, above which the clarinet and string quartet play. At about the four-minute mark, the piano switches to playing a sequence of rapid high Ds in the upper range while the clarinet and strings weave their own variations around it.

Interestingly, the notes on the music are written by fellow composer Kalevi Aho, whose releases on Bis I have praised on this blog. To quote Aho, “The salient features of Athene are its constant motoric move­ment, recurring motifs, quick note repetitions and rapid scales. Topping it all now and then are clarinet shouts or glissandos. The piano sometimes seems to grind like an en­ergetic, motoric mill. Only at a couple of points does the music subside into more mystical atmospheres dotted with slightly longer melodic phrases, but it soon picks up again into a quick toccata.” As I grow older, I tend to ignore the form used in most music, although of course when I recognize a canon or a fugue I bring it up. To me, it’s how the music develops exponentially, how it sounds to me and whether or not it develops in an interesting way that is much more important. I think that composers generally get too hung up on form because they’re trying to impress each other and academics. Yes, I know what a toccata and a passacaglia are, but big fat hairy deal. There’s a lot of in-one-ear-and-out-the-other music, both old and new, that uses those devices, as well as some excellent pieces old and new that use them but you don’t pay that close attention to the form because the music is so interesting. In fact, I would go so far as to say that too many composers, particularly the older ones, got so hung up on form that they forgot to be creative.

And make no mistake, Athene is truly creative. It continues to develop and holds your interest throughout its 25-minute length, even at the 13-minute mark where the piano’s rhythm almost sounds like a freight train muscling its way down the tracks as the clarinet shrieks like a train whistle on LSD. Leinonen has a clear idea of where his music is going, but he also has a vivid imagination, and it’s the imagination in this music that captured my attention and held it. At about the 15:45 mark, as Aho said, the volume recedes as well as the clarinet and strings as we hear the piano rumbling softly and more gently in its bass depths, but the other instruments enter in their lower register, the piano begins playing four-note figures in the mid-upper range, and things ramp up again quickly. One could go on about the interesting and novel things in this piece, but the listening experience is far more interesting than anything else I could add about it. I did, however, like the moment at 21:42 where the cello plays pizzicato like a jazz bassist. And then, another surprise: the ending. I won’t spoil it for you.

Like Athene, Leinonen’s string quartet uses forward-moving motor rhythms and a relatively narrow range of atonal harmony. The core of this work is a four-note chromatic figure moving in seconds over a minor third (so says Aho in his notes). Leinonen’s string quartet does have its softer, gentler, more lyric moments in which the forward propulsion is suspended. He also varies the rhythm more frequently in this piece, using not only syncopation but contrasting rhythms between the lead violin playing the top line and the rest of the quartet as a unit, later breaking the cello off into its own rhythmic figures. Also, despite being in one movement, this quartet does have its slow section, corresponding to an “Adagio” movement, and here the music is very lyrical and almost regularly tonal for a considerable stretch. Indeed, the quartet’s unusual rhythmic variants put it on a different plane from those of Athene. I was glad to hear that Leinonen did not fall into the trap of simply repeating formulae from one piece to another. Weird string portamenti are also heard during the last two minutes of the quartet, and this time the music has a definite ending.

Foga is slightly older than the other two pieces, being written in 2002. It begins as a piano quartet, with slower, more mysterious music than the preceding two pieces, before the clarinet enters, although from that point on there are several dramatic crescendi as well as rhythmic interruptions by said clarinet which lead to more rapid and energetic passages for the strings. The piano drops out for a spell, returning to add some dramatic low notes and chords to the proceedings before taking a solo of its own with pizzicato strings and a return to the slower, more somber pace. The tempo then picks up again, and there are some dramatic staccato chords as well as some edgy cello figures played a cappella. This cat-and-mouse game continues through the piece, holding the listener’s attention as the music changes and develops. At about the 6:30 mark, the clarinetist switches to the bass clarinet, adding some ominous sounds of its own as the other instruments swirl around it. The piece ends on a soft, sustained clarinet note.

This is outstanding modern music, well crafted and fascinating. A real treat for me! 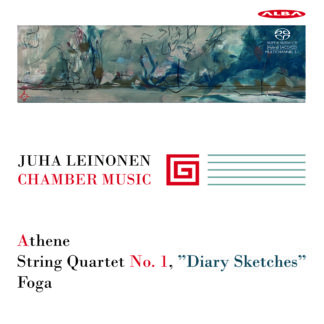