On this album violinist Kaija Saarikettu and pianist Juhani Lagerspetz perform Paavo Heininen’s Boston Sonatas. The project began with a commission from Boston for a violin sonata, prompted by Kaija Saarikettu’s recording of Heininen’s Sonata op. 25. A short while earlier Heininen had visited Boston. Even though he is a proponent of absolute music, the things that he saw and experienced in the city became the inspiration for his thought processes. Once the Sonata that was commissioned was finished, Heininen discovered that there was material left over. So he wrote a second Sonata, and since the first came to be casually referred to as the ‘Boston Sonata’, the second one became the ‘Boston Variations’. This was followed by the ‘Boston Ballad’. These are all interlinked in that ideas presented in one sonata may be developed and come to a culmination in another sonata.   Paavo Heininen (born 1938) is a composer, essayist, Professor and pianist. He has also had a long career as a Professor of Composition at the Sibelius Academy. During his career Heininen has written orchestral works and vocal music, two operas, some “jazzy” works for big band, concertos, six symphonies and numerous chamber and soloworks. In the last decades he has been especially prolific composing duo sonatas, quartets and quintets. He has also written works that cover an entire concert program.   Kaija Saarikettu’s (born 1957) success in violin competitions marked the beginning of her career. Since then, she has performed extensively at her own concerts, as a soloist of orchestras and as a chamber musician in most European countries, the United States, Japan and Russia. Saarikettu’s interest in the music of our time and collaboration with composers has resulted in a large number of pieces written for her. She has premiered and recorded several violin concertos as well as solo and chamber music compositions. Saarikettu has performed as a soloist for numerous international orchestras in addition to most of the Finnish orchestras. Since 1995 she has been a Professor of Violin Music at the Sibelius Academy. In recent years, Saarikettu has also dived into conducting.   Juhani Lagerspetz (born 1959) began studying the piano at age six at the Turku Conservatory. He continued his studies at the Sibelius Academy and the Leningrad (now St. Petersburg) Conservatory in Russia. Lagerspetz has won competitions in Finland and placed well in international competitions too. His success has led him to perform in Scandinavia, Europe, Japan, Russia, the USA, South Korea, Chile and Brazil. Lagerspetz has collaborated with many conductors and orchestras world wide and he plays regularly as a soloist with Finnish symphony orchestras. He is also active as a chamber musician and has performed with some of the leading instrumentalists of the world, and in numerous chamber music festivals. 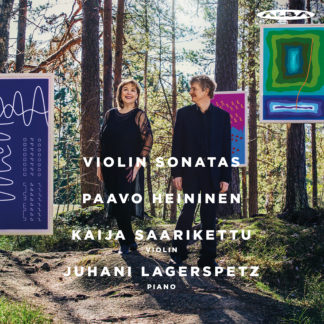