This is a small bit of the liner notes essay written by Leif Segerstam for the third episode in the Brahms/Segerstam Symphonies series from Alba. I like to think of it as just a thousand or so words plucked at random from a multi-volume Finnegans Wake-style tome explaining Segerstam’s odd, and oddly appealing, musical world. So much can be divined by carefully parsing Segerstam’s interpretation of the four great orchestral works by Johannes Brahms, and there is more information imbedded in the symphonies from Segerstam’s own late works. But there are plenty of blank areas left on the map to puzzle over.

The first album [https://amzn.to/2xsofP4] exploring the musical worlds of what Segerstam calls “the beardy brothers” matched Brahms’ First Symphony with Segerstam’s Symphony 288. The second had the Second Symphony and the 289th. This release has the sunny Third Symphony to go with Segerstam’s 294. Not that the Finnish composer is using Brahms as a model. Rather, it’s Sibelius’s 7th Symphony that provides the scope and structure, while the musical language is rather more like Penderecki or Rautavaara. As to the Brahms, we once again have things slowed down to a surprising extent. It’s like Segerstam has stopped everything, and he’s picked up the Symphony and is turning it around in his hands, examining it closely. The orchestral playing is gorgeous, but all the tension and life is gone; it’s like we’re driving a car with most of the air let out of the tires.

I can’t help thinking that Segerstam is up to something other than just recording a well-known and well-loved symphony. Is this a case of everyone else playing checkers while Segerstam is playing chess? Let me ponder that for a while… 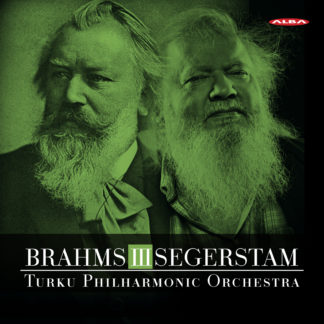