Outi Tarkiainen is one of a new generation of composers whose work bears intense witness to the world around it and whose music engages audiences while advancing the art form without compromise. “I see music as a force of nature,” Outi has said, “that can flood over a person and even change entire destinies.”

Outi was born in Rovaniemi in Finnish Lapland, a place that has proved a constant source of inspiration for her. She studied composition at the Sibelius Academy in Helsinki with Eero Hämeenniemi and Veli-Matti Puumala, at the University of Miami with Ron Miller and at the Guildhall School of Music and Drama in London with Malcolm Singer. Since 2017, her music has been published by Edition Wilhelm Hansen in Copenhagen which has represented the finest Nordic composers since the nineteenth century.

Since her student days, Outi has been drawn to the expressive power and natural truths of the human voice. After making her name as a composer-conductor with some of Europe’s leading jazz orchestras, Outi collaborated with the Finnish vocalist Aili Ikonen on a series of jazz orchestra works including Into the Woodland Silence (2013), a score that uncannily combined the composer’s sense of natural mysticism with the distinctive textures of the jazz orchestra tradition, and was recorded for Fredriksson Music. More recently, her saxophone concerto Saivo (2016), written for the saxophonist Jukka Perko, explores ideas of duality and illusion – in both the saxophone and in concerto form itself.

Although I always get a little nervous when (mostly young) musicians and composers use buzz phrases like bearing “intense witness to the world” and “the expressive power and natural truths of the human voice,” it is the music itself that always counts first and foremost, and Tarkianen’s earlier experience composing for and leading jazz orchestras intrigued me as much, if not more, than anything she has said about herself and her music. And from the very opening of the Trois Poèmes for string quartet, with its jagged lines and abrasive harmonies, we know we’re in for a wild ride. Moreover, this music is well-developed along classical lines; it is not just random atonal sounds (the kind of music I often refer to as “Schlumph”). As the first Poème develops, in fact, the music becomes more lyrical if no less atonal, albeit with sharp interjections by the strings. These aren’t musical poems of love and relaxation; they are poems of intense emotion, almost at the point of bursting. Not even the slow poème, titled “Désir,” has any of the usual “neo-classical chamber” sound that so many listeners (but not me) are enamored of nowadays. Moreover, Tarkiainen’s music, though including unusual devices, is not gimmicky, but rather quite substantive. It goes somewhere rather than remaining static in some jaggedly painful place, although the third piece, the hyper-tense “Dependance,” follows the second without a break. You had better be in a relaxed and open frame of mind before you listen to this music, otherwise you may find yourself falling into an emotional pit. In its very different way, it reminded me of the strong quartets of Bartók and even a few of Weinberg’s, where the combination of modern harmonies and intense, almost dark emotion embrace one another. By contrast, Sans Paroles for solo clarinet, though no less atonal, has some moments of real beauty and relaxation, and it is played splendidly by Lauri Sallinen. Indeed, some of the moments in this piece seem almost whimsical when compared to the Poèmes. This is another thing I like about Tarkianen’s music: it has some variety of approach in the different pieces. Her musical “voice” is not monotonously the same, a trap into which too many modern composers fall. About the only device I hear as being repeated in some of these works is the use of wide intervallic leaps, apparently something she relies on to create drama.

Kunnes Kivi Halkeaa (Until the Stone Splits) uses the solo violin in percussive and lyrical mode, but also requires the soloist to play on the edge of the strings to create an almost microtonal effect as well as purposely rough bowing for intensity. Yet none of these effects sound superfluous or tawdry; Tarkiainen is always thinking ahead in terms of her musical development.

I was particularly impressed by her Baudelaire Songs, “The Albatross,” “The Abyss” and “Obsession.” Soprano Tuuli Lindeberg has a wonderfully pure, clear voice, and negotiates the unusual vocal line with its dips and portamenti extremely well, but although the songs appear to be sung in English, her diction is much too Finnish-accented to be clearly understood. Something for her to work on. These pieces reminded me of Leif Segerstam’s settings of Blake’s Songs of Innocence and Experience from back in the 1970s, a cycle I dearly love (and which should be performed once in a while, for heaven’s sake!). She also has an excellent quick trill, a rarity nowadays. Sanasi, Kiveen Uponneet (Thy Words, Submerged in Stone) reverts to the intense, jagged style of the opening string quartet pieces, and is superbly played by cellist Markus Hohti. Even in the most vicious spiccato attacks on the instrument, he maintains an excellent tone and avoids roughness while still projecting drama. Tarkiainen manages to vary her musical line while employing similar techniques as in the quartet works. Lindeberg returns to sing Into the Woodland Silence, here accompanied by a trio of clarinet, cello and piano. The latter instrument often rumbles around in its lowest and darkest range to create a sort of woodland nightmare amidst the “silence.” Once again, Lindeberg sings splendidly, except here it sounds as if the language is her native tongue (I had no booklet for download with the mp3 tracks), so naturally she enunciates it well.

The disc ends with, of all things, an accordion solo, …Ja Alkoivat Laulaa (…And They Began to Sing), but if you were expecting the Beer Barrel Polka you’d be disappointed. Rather, it sounds like something an accordionist might play when completely smashed on liquor and pot—dark chords on the buttons and odd rumination on the keyboard. Different and dark are the best adjectives I can apply to Tarkiainen’s music. Did I mention that it’s also well written? And yet it has no relationship to jazz. I can only guess what her jazz pieces sound like! 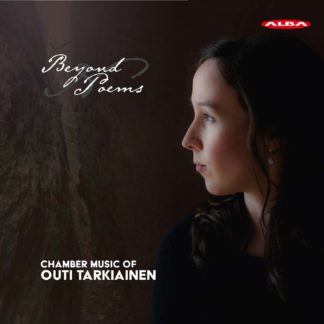