Duke Ellington wrote Sacred Concert in the mid-1960’s and performed the work with his orches- tra and various soloists between 1966 and 1974 at churches around the USA and Europe. Ellington never wrote a score of Sacred Concerts, and it wasn’t until 1993 when John Høybye and Peder Pedersen produced a score mostly meant for choirs, but including the full vocal lines and harmonies. Ellington’s own perfor- mances were all different. The amount and order of the movements and everything about interpretation was agreed just before the start of each show, and the musicians and soloists improvised in true jazz style. The movements of Sacred Concert are reflections and allusions of traditional gospel songs and the historic roots of soul music in America, and the songs sung by black slaves in the hellish working conditions of the cotton fields. The threads of freedom, brotherhood, God’s mercy and praise run through each lyric. The album was recorded at the Kokkola Church in 2017, one long take at a time, making the im- provisa ecorded post-production in a studio by Anu and Marzi. 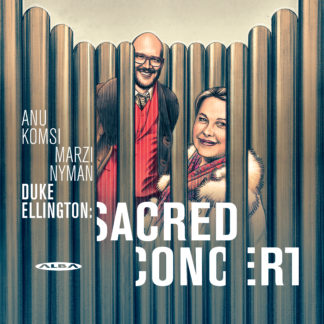